Soaring high, circling up above, the Red-tailed Hawk is a source of inspiration that has fueled our collective infatuation with flight for millenia. Our pursuit of their perfection has brought us to this incredible moment where we can finally join them in the sky. The goal now, is to make the experience of soaring with the birds accessible to everyone.

Paragliding is a gift that keeps on giving. From your very first training hill flight, to your first mountain flight, all the way to your first soaring flight, your excitement and sense of liveliness will only grow. The experiences that this sport and the community surrounding it will reward you with, throughout your life as a paraglider pilot, are unique. You’ve struck gold, the key is to make it last.

Sustainability is the mantra of our approach to instruction. The goal is to help our students become confident and competent pilots that can go on to enjoy a lifetime of safe flight. Part of becoming a successful pilot is developing both the physical skills and the mental capacity for effective decision making and situational awareness. With this in mind, we structure our lessons to confront both the physical and mental challenges that await any new pilot. Sound judgement, decisiveness and self-awareness are the traits we value most and try to instill in every one of our students.

Misha Banks is a USHPA-certified Advanced Paragliding Instructor and a native of Boulder. He founded Red Tail Paragliding in 2019 with the goal of raising the standard for paragliding instruction in the region after falling in love with free flight a few years prior.

He boasts an impressive safety record with over 4,000 student flights instructed. He’s coached over 200 students through their first flight and prides himself on ensuring safe flights and soft landings for his students every time they launch off the hill.

If he’s not at the hill in Boulder instructing students, he’s likely somewhere in the air paragliding along the Front Range. Paragliding is his passion and he’s always motivated to learn and improve his own abilities and knowledge. 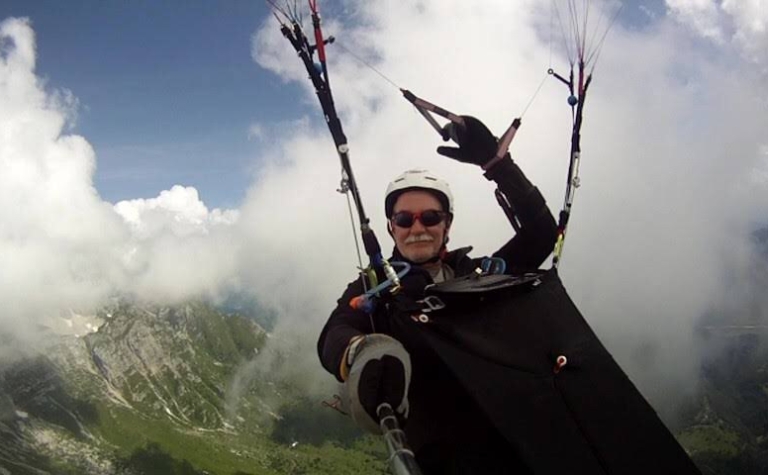 Brian Doub was born and raised in Indiana but learned to fly in the Lake District in Northern England. He’s been flying for over 20 years and began teaching in 2014 as a BHPA Instructor (British Hang Gliding and Paragliding Association).

He moved back to the USA in 2021 after living overseas for the past 32 years to be near his grandchildren and to teach paragliding with Red Tail Paragliding.

For the latest on upcoming clinics, trips and new gear.